How Not To Sell Economic Reforms

Everyone knows our nation is at a point where important decisions have to be made on instituting reforms, in key sectors of the economy and polity. As you know, these things come with some hardship. That being said, if well thought through and implemented, the chances of it ending in a win-win for all is greatly increased.  I believe leadership is the single most important factor in pushing and sustaining reforms.

Permit me to use the fuel subsidy removal attempt by the previous administration as a case study, while introducing you to the model shown in the inset picture. 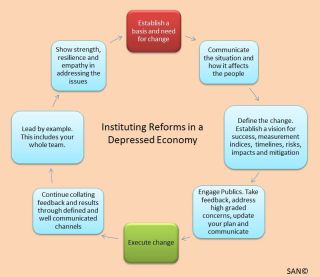 It has always been my conclusion from the early days that President Jonathan and his team did not manage the fuel subsidy removal initiative well. They did not communicate the problem properly; neither did they effectively sell the vision to Nigerians. Rather they premised the move on their inability to curb sabotage and fraud. This immediately created a weak position for negotiating with the citizens. A leader should be seen as a protector and not one who runs from problems or cabals.

And eventually it was the house of assembly that came to their aid by carrying out a public enquiry. Even after the president initiated his own investigation, he never acted on the findings. Also, he refused to properly prosecute and punish any of the indicted persons and corporate entities. Rather, he admitted one of the chief offenders into his political fold and used him as an instrument for his re-election campaign – TAN.
Another area where he failed was in selling the belt tightening that should have come with the subsidy removal. He showed poor example in attempting/proposing to order a new private jet into the presidential fleet of almost ten, while continuing to rack up N1B Naira budgets for food and N300M for kitchen upgrades annually. Also, he protected a minister, who had allegedly spent billions of Naira on private jet charter, from probe. At the end of the day, the subsidy removal and other belt tightening reforms failed because of leadership that was not exemplary and that showed no commitment or resilience.
Not only did Nigerians not trust the motives of that government, they were never inspired to sacrifice.
We hope that this new administration will immediately take he bull by he horns and use its immense goodwill in acting, by selling and instituting reforms that will stem the tide of inherited rot and turn this economy around for the good of the Nigerian people.
SAN
May 25, 2015 0